I am finally calling it a wrap on this bathroom.  There are things I should probably do over, (like a cabinet door–or two), and I will, but right now I am ready to take the lessons learned from this project and move on to something else!

I cannot find my before shots, so I took a picture of our other bathroom, which is almost identical to this one.  The master bathroom, was in worse shape, though.  The floor had a large crack in it from where the house has settled, and the bathtub’s finish had worn off and was beyond repair, but the tile and cabinets were exactly the same. 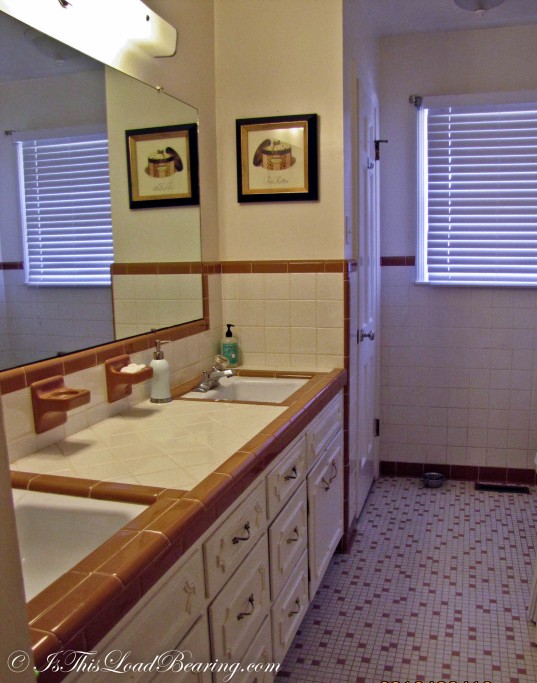 This is very similar to what the bathroom looked like “Before” 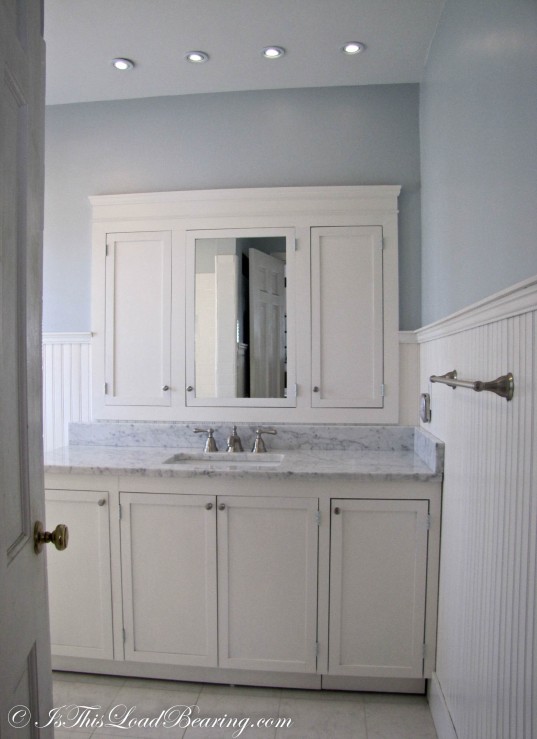 I have ordered a turn latch to go on the cabinet over the toilet.  Speaking of toilets…who puts one in front of a full length window?!  We badly wanted to move this but it would have been too much of an undertaking. 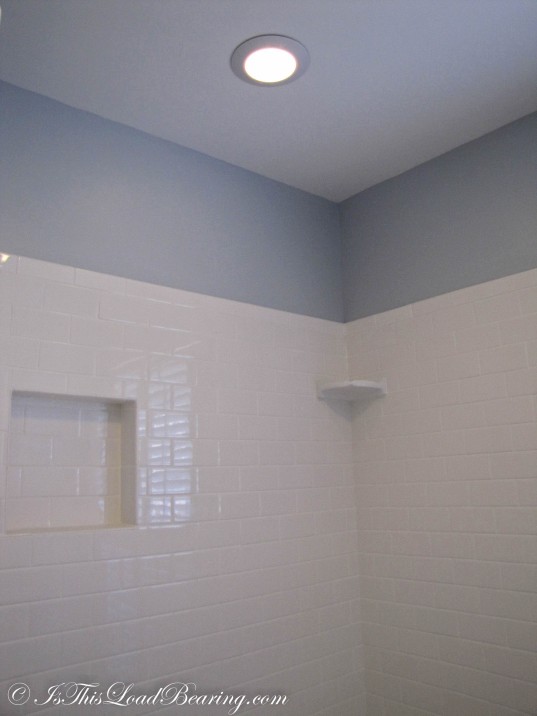 I am beginning to wonder…  I did get the doors hung, though!  I wanted to do this before I painted them to see how far off the mark they were.

They are far from perfect, but I think I can live with them.  All of the doors, except for the one on the far right, have a snug fit, so in order to allow for paint, I think I am going to have to shave a little off.  (I have already done this with the right one, and was afraid I took too much off, however I think it will be fine once it has paint on it).

That's Lilly, my biggest cheerleader. Or, maybe she just wants to be fed. 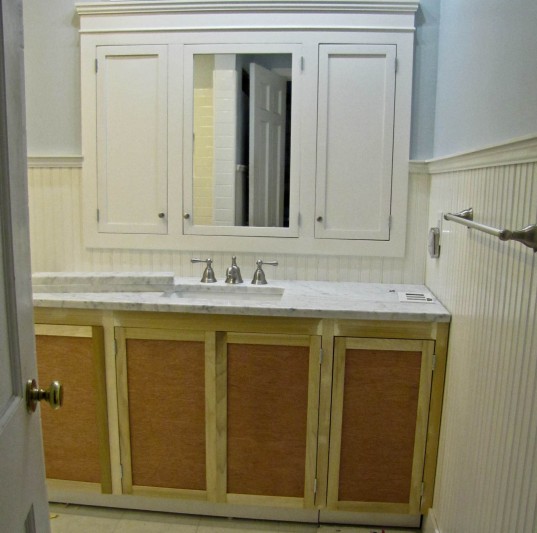 I hope everyone is having a great week!

Okay.  Here’s the status on the bathroom cabinet doors:

The first door I made–a few weeks ago–fit perfectly, however, the other doors were not square; the frame itself was not square; so, I ended up taking all of the doors apart and starting over.  The first thing we did was square up the frame.  Since only one part of the frame was out by 1/8″, we moved it over by tapping it with a hammer and a scrap piece of wood (so we would not damage the frame) to even it up.

Once that was done, I tore apart my old doors by cutting along the joints where they were glued together.  By doing this, I was able to reuse the stiles on the old doors, as the rails on the new ones. 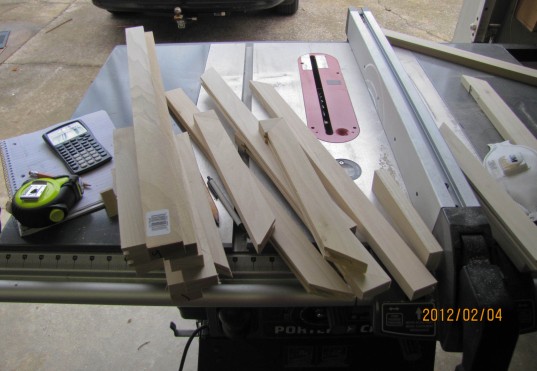 This time I built the doors differently.  I used an excellent tutorial by the very talented Sandra at Sawdust and Paper Scraps.  You really should check out her blog–she is amazing and her blog is a constant go-to resource of mine.  Thanks, Sandra!

My first attempt at the doors, I made the cuts at a 45 degree angle.  Very much like a picture frame.  This time around, I went with a traditional 90 degree cut.  Like I said, I used the stiles from the old doors as the rails for the new doors.  I cut new stiles out of new stock.

Then I had to router the new stiles so the panel could fit.  When routing the ends of the rails, I secured it against a larger piece of scrap wood with a clamp to keep it even, and to keep it from getting sucked into the router blade. 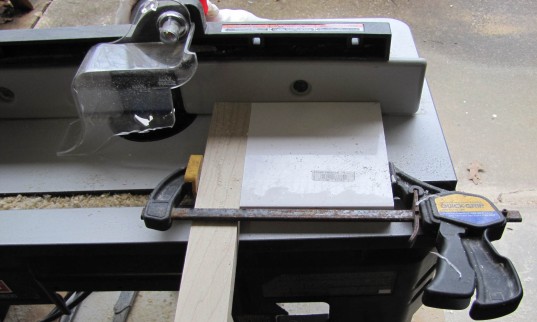 Then, I cut some very small pieces out of a furring strip.  These will be used to join the rails and stiles together.

This is where the small furring strips go:

Since our garage is jammed full of motorcycles, lawn equipment, and all kinds of junk, I don’t have room for a proper work table.   Which is why I am using the top of a freezer to assemble my doors.

Once everything was joined together and squared up, it was time to clamp them up to dry. 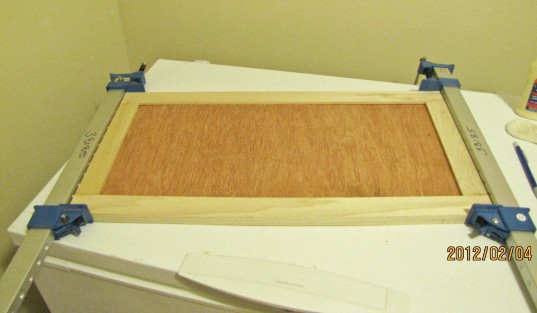 Once the glue had enough time to dry, I could dry fit the door.

As of this post, I have completed two doors.  Now I’m off to make the other two.  Hopefully this project is coming to an end.  I have so many other things I want to tackle, and I’m really tired of this bathroom reno…

UPDATE:  All four doors are done!  Tomorrow we dry fit, hang, and paint. 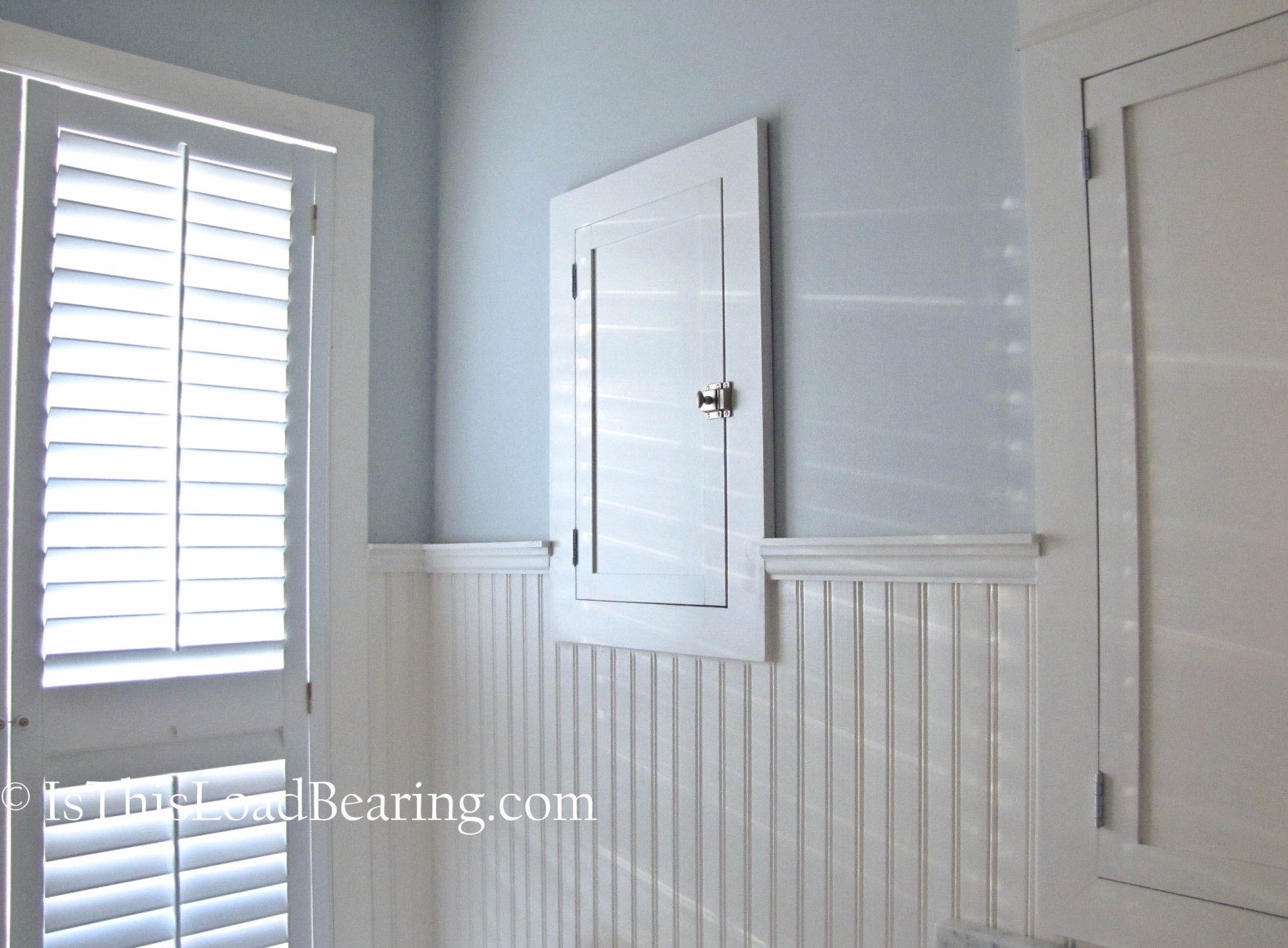